In New World, there are no pre-determined classes. Players will be able to equip up to 2 different weapons at any one time. Each weapon comes with its own series of skills in the form of two distinct Weapon Mastery trees and each will need you to fight with the weapon to level it up to a maximum of 20. Let’s breakdown how weapons work in more detail

What weapons can I choose from?

Weapons fall into four categories: One-Handed, Two-Handed, Ranged and Magic. You can acquire weapons through various means such as looting chests, containers or enemies, through crafting or through Quest rewards.

The power of a weapon is determined by a combination of Gear Score, Perks and Gem Sockets. Not only will these features determine the strength of the weapon, it can also customise the role you will play by boosting specific abilities such as socketing a Gem to enable you to taunt enemies.

What is Gear Score?

An item’s Gear score is a summary value that determines how powerful it is. The higher the Gear Score, the stronger your damage output will be with the weapon. The Gear score can also affect the chance that the item will include powerful Perks or Sockets to support gems.

Each item will have a range of Gear score possibilities. Higher tier items are likely to include higher Gear Scores. Whilst gear score is completely at the wims of RNG when it comes to looting and world pickup, crafting is influenced by the skill of the crafter. Each craft recipe will include a range of gear score that can be produced. This will increase the greater the level of the players craft experience. Therefore crafting as a high level Weaponsmith, as an example, will generate weapons with a greater Gear Score.

What are Weapon Perks?

Weapons can include Perks, unique traits that influence anything from converting damage to a specific element, increasing damage at various levels of HP or absorbing damage. These perks can add significant amount of power to the player especially if used in the right environments. The amount of Perks your weapon can hold will depend on the Rarity starting with no perks for Common weapons up to 3 perks for an Epic Weapon.

What are Gem Sockets?

Weapons have the ability to affix Gems in Gem Slots. There are two types of Gems, Raw and Cut gems. Raw gems can be acquired from various mining and looting activities in the game. Once you have enough Gems, a Stonecutter can refine the gems into a number of recipes creating Cut Gems. For example, a Carnelian Tier 3 gem can be cut into a Cut Carnelian Gem that can be socketed into a weapon to provide the player with either a Taunting II effect, enabling Weapon abilities that can taunt to force enemies to attack you and attacks will generate 200% threat or in reverse it can reduce threat you earn by 6%. There are a variety of Gems available to Stonecutters empowering your weapon and your player.

Gems once socketed cannot be removed however you can replace it with another gem.

Currently there are 11 different weapons that you can choose from and we expect there will be future additions with the recently hinted Void Gauntlet in the works. The list of current weapons are: 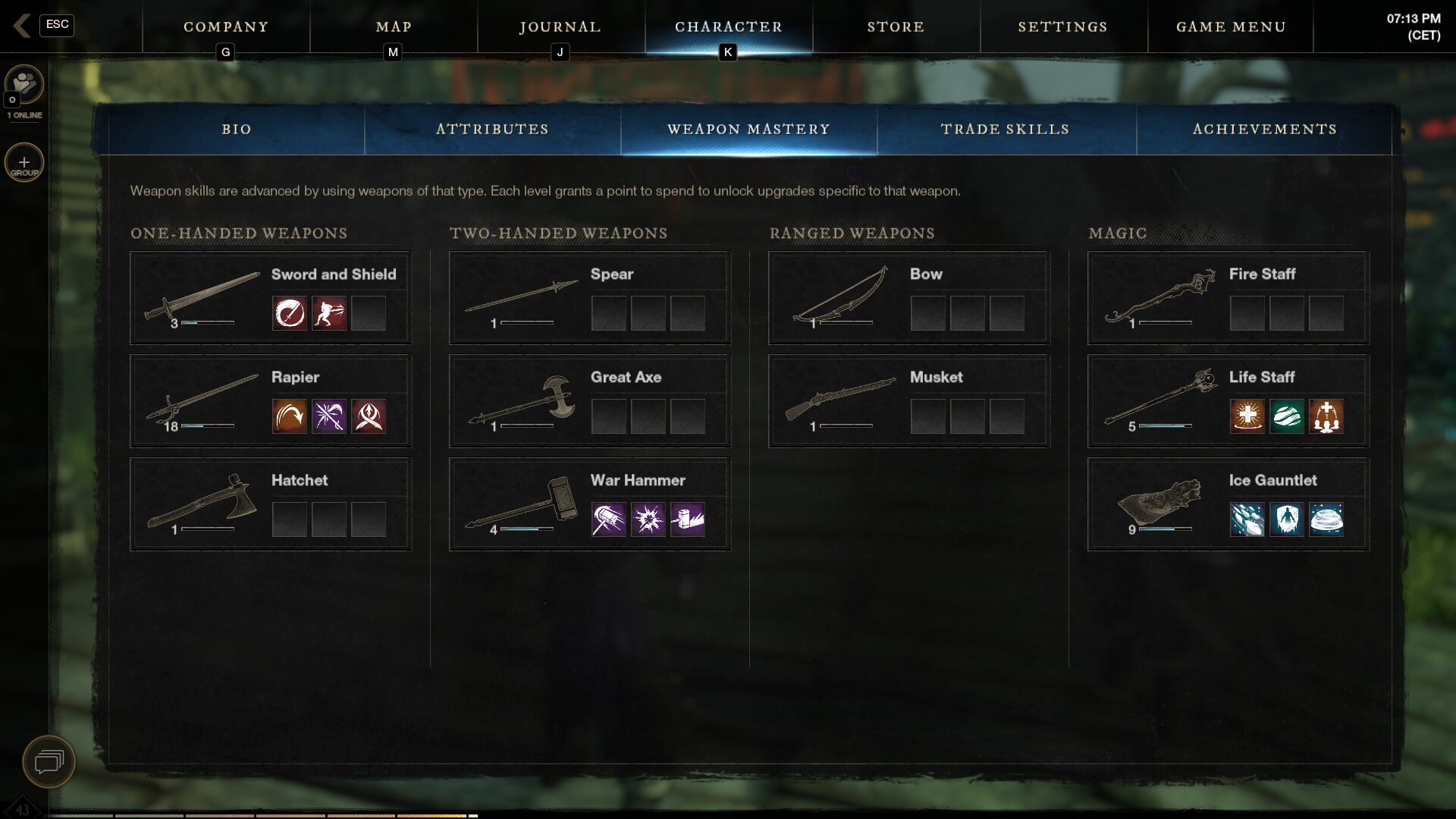 How do I level up weapons?

Once you equip a weapon, every enemy you slay in Aeternum will grant you experience. Once you earn enough to level up, you will receive a Weapon Mastery tree trait point that you can use to unlock 1 of 6 active abilities (3 per tree) or a number of different passive abilties. You can find all of the individual weapon skills and trees on our individual weapon guides. You can return all your weapon mastery trait points for free up to level 9. After level 10, you will need to spend Azoth to respec. You will find it quite quick to reach level 3-4 and unlock all active skills which will give you a good feel for each weapon before you commit more time into levelling to max.

Below is a table of experience required per level to reach the maximum of Level 20:

What are Legendary Weapons?

As you progress through the game and reach more difficulty challenges, you will come across Legendary Weapons. Unlike other weapons, these are unique named and include a unique combination of Perks and a fixed Gear Score. These weapons are often extremely powerful and are highly sought for. They are however difficult to earn. Often these are dropped from the toughest Bosses and from Expeditions.

Additionally there are Legendary Weapons that you can earn from special and unique Legendary Quest Chains.