New World requires lots of different factors in order to complete and one of them is Gathering! So what is it?

Logging is the deforestation of trees, there are 200 levels to be at the max level and you need to do a lot just to get to the second stage. You’ll be able to log young trees from the moment you equip your axe. You’ll find these all over the map in pretty much every area but more commonly in the starter areas so if you have some time you can sit and deforest a whole area to level up your logging. Then once you hit 50 you’ll be able to chop down Mature trees which is the next stage up and you’ll need to farm these when you get to a higher level as the wood is used in crafting things. The next milestone you’ll hit is 100 where you’ll be able to log Wyrdwood which are these blue coloured tress that looks awesome! After this milestone, you’ll be able to track them at 125. And finally, it’s Ironwood which is logged at 175 and tracked at 200, these will be in end game areas so keep your eyes peeled if you’re at that stage!

Mining is bouldering of veins, there are 200 levels to be at the max level and mining is very simple! You’ll be able to mine Iron and common boulders at level 1 as long as you have a pickaxe equipped! You’ll find these in rocky areas buried into a wall or in a grassy area just sat randomly awaiting a miner to come along and scoop it up! Once you’ve levelled your mining to 10 you can start to mine silver and this will come in handy a bit later on! Next is oil at 20 and if you are ever short of oil then head over to Weaver’s Fen and with every step you take you’ll be finding oil patches everywhere! In the next few Milestones, you’ll start tracking ores as Iron is at 25, Silver is 35 and oil is 45. Having Iron and Silver being tracked is a lifesaver as more often than not you’ll pass many veins that you’d have been none the wiser to. Gold can be mined at 45 and alchemy stones at 50. These come in handy as you progress through the game. You can start tracking these at 70 and 75. The next big ore you can farm is at 100 and it’s the starmetal now this is huge because you can start to make starmetal gathering tools which will increase the speed that you can harvest as long as your engineering is up to speed and the forge is a high enough level! You can track it at 125. The next stone you’ll be able to mine is Lodestone then Platinum at 105 and 110. And trackable at 155 and 135. Finally, the last minable ore is Orichalcium is collected at 175 and tracked at 200.

Fishing is the capturing of fish from either saltwater or freshwater. There are 200 levels at it will be a slow process to getting it up but you’ll find rare and secret hotspots as you progress!

Harvesting is the collection of plants. There are 200 levels of harvesting and you can start 4 of them at level 0! Equip a sickle and go! At 0 you can harvest Hemp, Farm plants, Fungi and magical creatures. Hemp is very helpful for levelling your weaving and you can start tracking it at 25. Magical plants are tracked at 45 which is great for your arcana level. But then it goes dead for a while until 100 where you can obtain Silkweed and you can track it at 125. And Finally, Wirefiber is obtained and trackable at 175 and 200 and you’ll find these in the late game areas or randomly spotted in lower areas.

This is the killing and skinning of animals. There are 200 levels and it is all about your tracking as the higher the level the more you’ll be able to track. At 25 it’s small prey such as rabbits and turkeys then 50 it’s medium prey such as boars. 75 is large prey like elks and bison. A small predator such as wolves is at 125 and large predators such as bears and alligators are at 175. 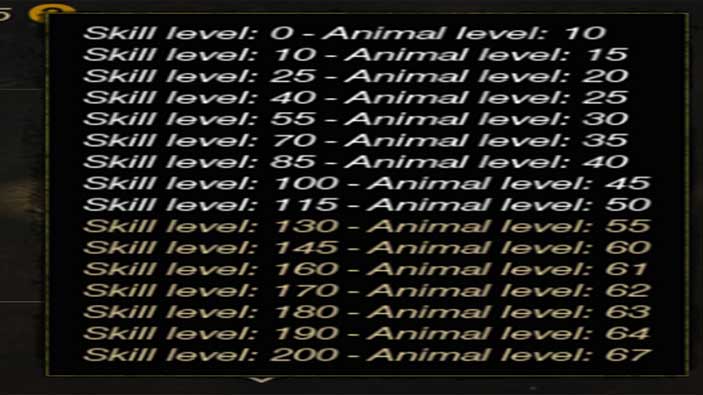