Void Gauntlet is on the way!

Void Gauntlet is on the way!

The Void Gauntlet is coming to New World! It’s been speculated since launch and players are looking forward to finally getting to use it. The Void Gauntlet is going to look very cool and will be used by many players we are sure. Using two ways of scaling this weapon could have the potential to be a beast! We can’t wait to try it out!

The Void Gauntlet is New World’s first-ever Intellect and Focus scaling weapon. The weapon uses a mixture of support skills that help to buff allies, while the weapon can spec into Intellect to do damage. The first tree is the Annihilation tree, which turns the Void Gauntlet into a purple energy sword as if it was pulled straight from the Halo franchise. On the other hand, you can use the power of the void to support allies, granting them powerful buffs!

It is possible the Void Gauntlet release date can be as early as 1.0.6, but it’s unlikely. With how big these content updates are going to be, we will likely see it at the earliest 1.0.7 and potentially as late as 1.1.0. It would make sense to get it by the end of November or the start of December at the latest, especially since the weapon seemed almost complete even before the game’s launch.

“The Void Gauntlet has manifested in Aeternum! Manipulate the powers of the Void to support your allies and debilitate your enemies with this magical DPS/support hybrid. It’s the first weapon to scale on both Intelligence and Focus, making it a great pairing with the Life Staff and other magic weapons. The Annihilation tree focuses on maximizing damage at close range and revolves around Void Blade, a summoned blade of corrosive void energy. The Decay tree offers ranged healing and debuffs and revolves around Orb of Decay, a dual-phase projectile that can debuff enemies and heal allies. With its arsenal of buffs and debuffs, the Void Gauntlet is perfect for group combat and can significantly bolster your allies at the expense of your enemies.” This is what the Offical website said about the Void gauntlet so it could be a mix between the lifestaff and the fire staff; therefore, depending on your team, you can change your build to suit! This is a great concept of a weapon and we hope it can live up to the expectation!

What do you guys think of the Void Gauntlet? Let us know in the comments below! 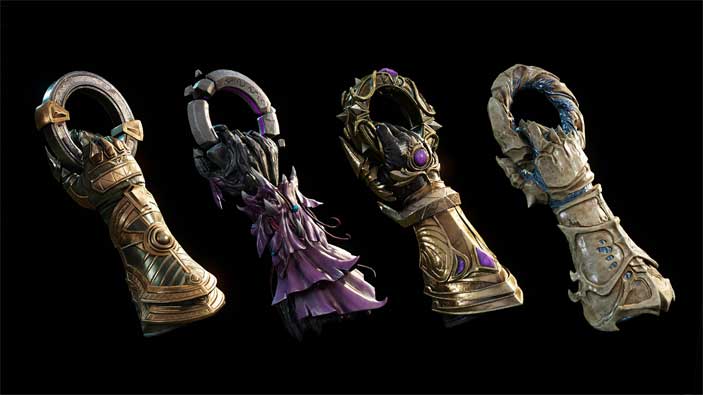